Je pense, donc je suis, French philosophical proposition by René Descartes literally means “I think, therefore I am”. In today’s highly connected world it’s hard not to be online, hence “I’m online, therefore I am” or “Offline is equal to nonexistence!” can be introduced rightfully and meaningfully.
The 5G is knocking the door with promise of offering higher throughput and lower latency. As 2G/3G and then LTE have been named “Vehicle” of the M2M, we can rationally call 5G as “IoT Spaceship” due to its revolutionary nature which enhances wireless frontiers to the level never seen before in the human history.   The 5G has been developed specifically to address issues in M2M/IoT that current and existing Radio Interfaces have not been able to address. Below article claims that the 5G will dramatically change what we know as IoT today as it’s going to unlock countless new opportunities that existing wireless technologies are not been able to tackle.

Since early 90s, telecom industry has been witnessing a new wave of mobile communications devices every decade, called new mobile generation. The 2G, 3G and then 4G have been launched in almost 10 years’ time interval. The 5G is promising to offer: Key drivers of 5G:   Needless to add that 3GPP LPWA (Cat-NBp and Cat-Mq)2 are also adopted by 5G and become main pillars of communication infrastructure of so-called Narrow Band IoT.   The new Radio Air Interface comprises New Frame Structure and Waveform, Massive Antenna Technology and Advance Coding and Modulation. These new features are among highlight of the 5G, nevertheless, the big leap and key improvement is the wider carrier bandwidth as it dramatically increased from 20Mhz in LTE to 400Mhz in 5G. Once such wide carrier bandwidth combines with capability of CA (Carrier Aggregation), then 2Ghz spectrum (and even higher) per connection is achievable, which ensures that exceeding 10Gbps speed would be practically possible.

2-MYSTERY OF THE ODD NUMBERS IN MOBILE GENERATIONS

Probably very less people recall 1G and even some doubt its existence as people do not like to talk about failure stories. Controversially, the 2G can be considered as the most revolutionary wireless technology in human history at its time. It arrived when industry had become exhausted with slow penetration of ISDN (Digital Wired Network). Those companies who understood the paradigm change from wire to wireless could take a lead and soon become stars of the industry. Nokia and Qualcomm had been growing in a few years, while companies like Alcatel and Siemens (Telcom) were disappeared.   The 3G, like her grandmother (the 1G), cannot be considered as true successful technology. While I write this article, many MNOs are planning to have 3G sunset even prior to 2G shutdown. There are reasons behind it which I avoid discuss them here to make this article a short one. Apparently mobile industry dislikes the odd numbers!   The new generation called LTE or Long-Term Evaluation, literally meaning that the technology and most importantly the market needed time to be matured. The LTE had been launched in a time when people were almost pessimistic about 3GPP mobile industry. The WiMAX was star of the industry with capability of offering at least 10x faster internet speed comparing to the 3G. Nevertheless, LTE has become the most successful wireless technology and transformed the world into true fully connected social network ordinated society.   With officially naming of the new generation as 5G, the industry made a peace with numbers again. But the risk is still there as it turns into an odd number, the 5! Could the 5G be unsuccessful as 1G and 3G had used to be? There are reasons to negate.
The 5G can offer better user experience as it offers high throughput and much better hand over between base stations, making even 4K video streaming in a vehicle quite enjoyable. End users are hungrily consuming more data with exponential growth rate, hence above features will be very much welcomed by subscribers. It’s predicated that the number of 5G subscribers will reach 1.5 billion by the year 2025 (Figure 1). According to GSMA, over 159 carriers will deploy 5G in 110 markets by 2025. 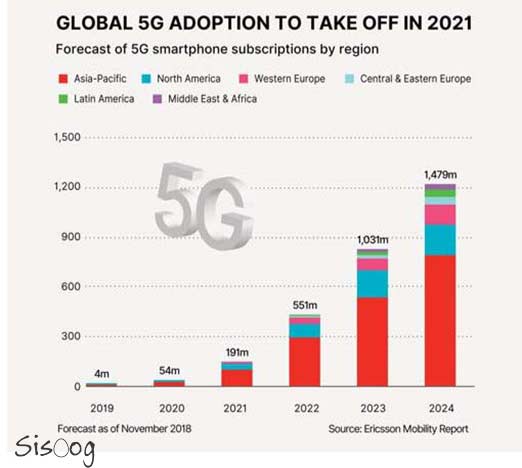 There is another reason that the odd number mystery will not be unpleased for the 5G. Do you think milliseconds latency can offer better user experience to subscribers? The answer is quite evident. Hence the question remains, who will benefit from such low latency? Yes true, The Machines!   The 5G main use cases are Fixed Wireless Access, Mobile Broadband, Public Services and Surveillance etc. As illustrated in Figure 2, it’s predicated that the market size of 5G based IoT devices will exceed 62m by the year 2025. 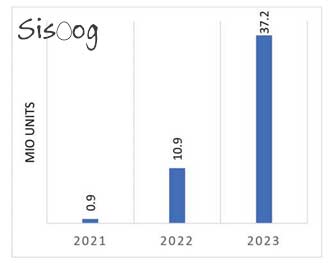 4- APPLICATIONS AND USE CASES

A very real use case of 5G is to provide higher data bit rate to fixed subscribers. Mobile technology is considered as true murderer of fixed network, since 2G and LTE have been defeating landline and ADSL/VDSL respectively. It’s now 5G’s turn to omit need for FTTH (Fiber to the Home) even before the industry gives it a birth. The trend is obvious: Home and Industrial Getaway and 5G Routers are among pioneering products to hit the market which consume bandwidth supposed to be provided by the Fiber.

“The always connected laptop” is getting popularity. This trend will be further strengthened by 5G. True virtual offices which allow people to conduct almost all office tasks remotely are becoming part of today’s business habits. Offices will be more and more moving back to the homes as they are supported with many other sophisticated features, just to name a few, 4K-Video conference call, document sharing, Cloud based ERP, real time translator assistance, robotics, etc. This makes life more joyful and decreases transport cost, traffic jam, fuel consumption and the need for bigger office space.

Mobile users will enjoy the next generation of connected immersive experiences as AR/VR mainly target entertainment market segment. Nevertheless, AR/VR have also become an undoubted part of digital economy and are transforming, for instance, how engineers design new products. You may also imagine a team of doctors conduct a surgery collaboratively by controlling robots remotely using AR/VR.

The Three-Dimensional Transportation (3DT) era will be coming within next decade. The human evaluation had commenced with 1D transportation when mankind could standup on his/her feet and start walking. The 2D transportation arena started with domestication of horses and continued by invention of trains and cars. Airplanes, copters and even spaceships cannot be considered as true 3D transport machines but rather 2.5D.   Drones are machines that can freely fly in three dimensions. However, in order to legally, technically and affordably become widely available they need to address certain challenges. Drones are poised to be highly connected and intelligent for collisions avoidance as well as prevention of entering into restricted areas. Therefore, they should be equipped with ultra-sophisticate auto pilot system, which cannot be economically and commercially viable unless it’s always connected to the cloud. The 5G would be excellent choice for its communication backbone to satisfy technical needs of the pipe in a cloud-based auto pilot system. 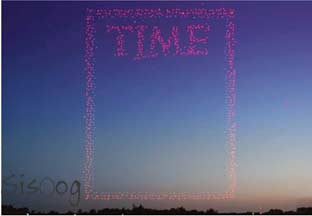 Cellular Vehicle-to-Everything (C-V2X) is an obvious use case of 5G as always-connected car and autonomous vehicle need high speed and low latency backbone to be realized. The new radio interface provides ability for higher level of predictability.   C-V2X immediately offers a robust platform to provide the vehicle with enhanced situation awareness. In contrast, the older DSRC5/IEEE 802.11p capability will rely on the deployment of new, dedicated DSRC-capable infrastructure along roadways, which has proven not to be easily scalable and even after 15 years of its invention is yet to become a main stream of ITS6 industry.   This is clear that due to advancements in autonomous diving and commercialization of its level-1 and level-2, the car OEMs are poised to accelerate C-V2X projects more aggressively. The competition to create the best driverless car has never been hotter and it will be further fueled by the 5G rollout.
Author predicates that by 2030 a connected/autonomous/AI driver can win formula-1 car race, if allowed to be a participant.
Needless to add that the 5G will be going to offer more facilities for the connected vehicles as it can provide in-vehicle entertainment, makes journey even more pleasant.

New GSMA report highlights how the 5G, Artificial intelligence and IoT will transform the Americas. The technology burden on IoT was eased somewhat with the introduction of edge devices that combine compute, connectivity, and storage in a single device to provide intelligence to a broad range of IoT use cases, which we have listed a few of them in this article. As 5G offers an excellent pipe, devices can utilize massive cloud computing and processing power whenever needed almost seamlessly. Artificial Intelligence (AI) is very resource intensive and its cost of computation is still high to be built into all tiny devices, however above changes will make AI quite affordable for a wider range of AI based uses cases.   Meanwhile Blockchain offers a unique platform to make IoT secure from inside in, which again needs a peer to peer, ubiquity, pervasive yet very fast communication pipe, simply 5G.   Next generation of IoT, named IoT-2 here, will be secured by Blockchain and will be highly intelligent thanks to AI engines inside devices and outside on the cloud. 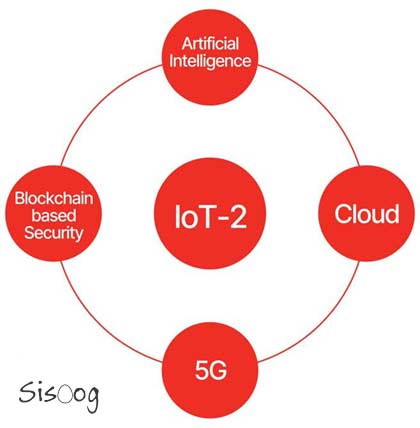 6-QUECTEL TO BE THE FIRST 5G MOVER

At Quectel we have clear strategy to be pioneer in offering cutting edge 5G modules, in both sub 6Ghz and later in mmWave. We have been tirelessly collaborating with our business partners and paving the way swiftly as Quectel is determined to be a strong player in the 5G-based IoT ecosystem. Quectel has been scaled up from a follower to challenger and now is proven to gradually become module market leader. Quectel leverages the richest experiences in LTE-A gigabits modules, to penetrate into lucrative 5G market. Quectel will be offering the broadest module product portfolio from NB-IoT to 5G and as a result, Quectel’s mission statement would impresses the audiences “To connect the unconnected things and build a highly connected smart world!” since we will be able to practically connect any connectable THING on the planet earth.


There is little doubt that the 5G will have profound impact on the course of human civilization. Mobile subscribers would benefit from the 5G in different ways which can be summarized as better user experiences. However, the greater impact will be on Machines, to make the world highly connected and ultra-smart. The foundation for such transformation will be the 5G.
The Majority of the largest internet companies either did not exist or were in infancy stage when 3G had been launched. LTE also created new wave of Startups, some become giant with multibillion market cap in less than a decade. In the next decade we will be witnessing rise of new companies which invest their time and money on technologies and businesses in line with how the 5G is going to shape the future of connectivity. We will also be witnessing the fall of many big names, who ignore the paradigm shift. This is how evaluation works, only smart and most importantly agile with capability of adapting to the changes can survive and dominate the world. A decade later and as per author’s predication we will talk about the 6G, which apparently can be commercialized by 2030. Literally speaking, the 6G can paternally offer 1Tbits throughput DL (Down Link), with latency a fraction of Nanoseconds. Future has never been that much exciting and inspiring, let’s enjoy it!   Author: Faramarz Oweissi
Facebook Twitter Email linkedin WhatsApp WhatsApp Telegram
https://8bi.ir/8871z کپی شد
حمایت از سیسوگ